Building a Bee Hotel- Easier Than You Might Think!

If you’ve read my last post, you may remember me saying I was going to build a bee hotel over the weekend. Now even though it took me a little longer than expected, I finished it today! I’ve never done any project like this, so I’m actually kind of proud of myself.
Here’s the result: 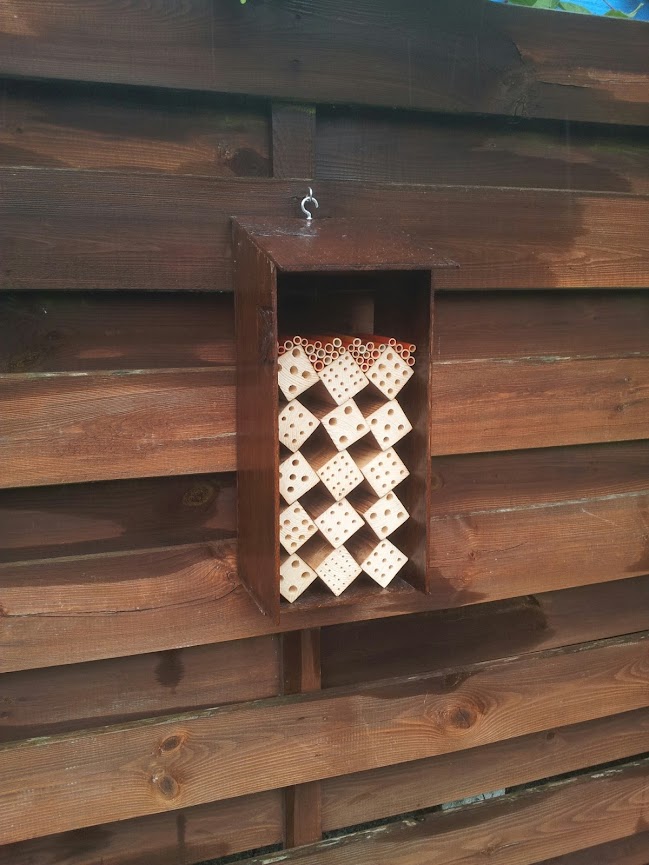 When I started I decided I didn’t want to go out and buy all the materials. So I rummaged through the shed and hobby room, and I found two old dresser doors, which I took the inner panels from, to make the outer box of the bee hotel.
I also found this large beam in the shed:

So I first made the outer box from the panels. This really was a lot easier then I expected. I’ve never actually build anything from scratch before, so it probably took me a little longer than it should have, but I got it done, and that’s what matters!
I stained the outer box, to help protect it from water and also to protect the actual rooms from getting damp. I did some research before I started. I didn’t want to make a bee hotel the bees can’t actually use, so I found out their needs first.
It’s very important the wood on the inside doesn’t get wet. If it does the bee’s eggs won’t survive and the wood itself will get moldy.

I put part of the beam in the top part of the box, to make it more sturdy and so the hook on top has something to dig into. I then sawed the beam into equal blocks, drilled different sized holes in the blocks, and then glued them in the outer box.
The different sized holes are for the different sized bees. The holes are supposed to range from 2mm to 10mm, but my drills only go as low as 3mm, so unfortunately the smallest types of bees are going to have to find an other place to build a nest. I also made sure the holes were clean. No saw dust or splinters should stay behind or the bees won’t use the tunnels. So if you’re going to do this, make sure to sand everything down and remove any sawdust.
I also went to the local thrift-shop the other day, and I found a bundle of bamboo. (You can find almost anything you want there, provided you know where to look). I cut the bamboo into equal pieces as well, and glued them on top of the blocks.
I then challenged the rain, and screwed a hook into the fence for the bee hotel to hang from and voila! A place for all to local bees to come hang out whenever they like.

Now I found out it’s a little late in the year to put up the bee hotel, since most bees start finding a nest around march, but some species might still make use of it. And if they don’t other insects will be able to inhabit the rooms until next year, so nothing is lost.
Over all, I’m very happy with the result. Not only did I build a functional bee hotel, but I did it using materials I already had (except for the bamboo, which was second hand). I had fun doing it, learned how to use new tools (Never used a jigsaw before!) and it looks great too!

Now tell me, have you ever made a bee hotel? You can share pictures, tips and tricks in the comments below.
I hope you had fun reading this, and maybe even learned something.
Gree(n)things,