I consider myself to be a minimalist. I don’t shop for fun, I don’t live to buy, I have very little attachment to stuff, and I dream of one day, when the kids are all grown up, moving into a tiny home with Bas. We’ll have a bit of land for my kitchengarden, maybe raise some chickens. We’ll be surrounded by nature. We’ll live off the grid. We’ll be free. It’ll be amazing…

But then I look around and wonder: How in the heck are we living like this?!!

Everywhere I look, there’s stuff, useless clutter, unfinished projects, items that don’t belong anywhere, more stuff! It’s overwhelming, suffocating and irritating. Over the past few years, somehow, we’ve managed to completely fill up our (rather large) house with things we don’t want or need. I honestly don’t know how it happened, but it happened. And now… it’s time to deal with it. 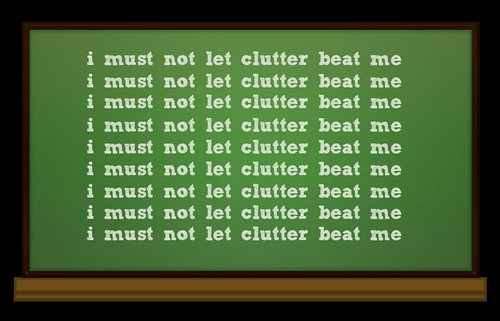 Bas got me an e-course (in Dutch) on minimalizing. It’s just what I needed to get things on track. It got me started sorting out our stuff. But you see, for me, letting go of stuff is easy. I bet I can point out 30 items in this room that can go, right now. The problem isn’t letting go of stuff… it’s getting rid of it!
Even though I can’t stand having all this junk around, I can’t just throw it out either. Because it’s all usable for other people. Most of it should be donated, picked up by the thriftshop, traded, or sold. It takes sorting, boxing, bagging, cleaning, picture taking, ad writing, and phonecall making. And when all that is done, most of it is still sitting in my house, waiting for a new owner to come pick it up. It’s maddening!

Honestly, part of me just want to rent one of those big containers and just toss everything. A few days of work and everything would be gone. I’d feel so much better… for a day or two. Then the guilt would set in. Then I would realize how much my “junk” could’ve helped other people. Then I would think of all the resources I wasted.
No. I can’t throw out all this stuff. I brought it into my home, and now I’m responsible for getting rid of it in a way that doesn’t harm the planet. I’ll be surrounded by bags and boxes for much longer than I would like. But at some point, it’ll all be gone. And I’ll be so much happier knowing I did my best.

I’m getting there. WE’RE getting there. And when the walls of stuff are closing in on me, I dream about that tiny house in the future. I take a deep breath, take the kids outside to find a Geocache or two, enjoy nature, and when I come back I’ll be ready to get back to work and build our dream life. Because anything worthwhile, takes effort, and I’m happy to be putting in that effort.